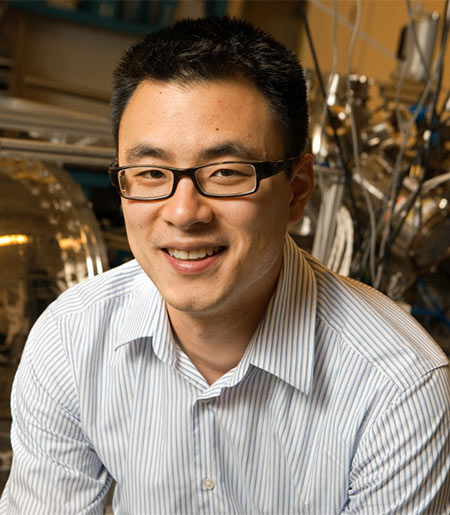 Kyle Shen is a Professor in the Department of Physics at Cornell University He received B.Sc. degrees in Physics and Electrical Engineering and Computer Science from M.I.T., and a M.S. and Ph.D. in Applied Physics from Stanford University. His research interests lie in the area of the synthesis and investigation of novel quantum materials. In particular, his research focuses on creating and controlling emergent phenomena at artificial interfaces and superlattices, interfacial and high-Tc superconductivity, utilizing techniques such as angle-resolved photoemission spectroscopy (ARPES), molecular beam epitaxy (MBE), x-ray absorption spectroscopy (XAS), and resonant x-ray scattering (RXS). His honors include the Presidential Early Career Award for Scientists and Engineers, the Office of Naval Research Young Investigator Award, the Air Force Office of Scientific Research Young Investigator Award, the Research Corporation Cottrell Scholars Award, an NSF CAREER Award, an National Academy of Sciences Kavli Frontiers Fellow, the NSERC Howard Alper Prize, an NSERC Postdoctoral Fellowship, and a Killam Postdoctoral Fellowship.

Angle-resolved photoemission spectroscopy (ARPES) is frequently used to probe the electronic structure of materials. The intensity measured during ARPES experiments is a product of the one-particle spectral function, the photoemission matrix element, and the Fermi-Dirac distribution function. Since the photoemission matrix elements depend on the polarization of the incident light and the parity of the atomic orbitals, the presence or absence of bands in ARPES spectra taken with different light polarizations can be used to determine the orbital character of those bands. Recently, a group at the Quantum Matter Institute at the University of British Columbia published a software package, chinook, for simulating ARPES experiments; the goal of the project is to use this software package to simulate ARPES measurements of various materials — such as FeSe, CoSe, graphene, and/or monolayer transition metal dichalcogenides — using different polarizations of light. The comparison between these simulated spectra and the experimental data obtained by members of the Shen group will facilitate the interpretation of experimental results, particularly with regards to the orbital character of bands near the Fermi level.

How can the software package chinook be used to simulate and interpret ARPES measurements of quantum materials?

Before beginning, the student should read about the theory of photoemission and the tight-binding model. The student will then review the documentation for chinook before proceeding to simulate ARPES spectra presented in literature. Throughout the process, the mentor will provide feedback on the calculated spectra and suggestions on simulations to run. Once the student is comfortable with the software package, they will use tight-binding models computed in Wannier90 to simulate recent ARPES measurements performed by other group members. The student will work with the mentor and other group members to compare and interpret the simulated and experimental results.

Tasks are as described above