For nearly 50 years, Terfenol-D (TbxDy1-xFe2) has reigned as the material for which an applied magnetic field results in the greatest change in shape, a property known as magnetostriction. A distant second to Terfenol-D is Galfenol (Fe1–xGax), the best magnetostrictor free of rare-earth elements. 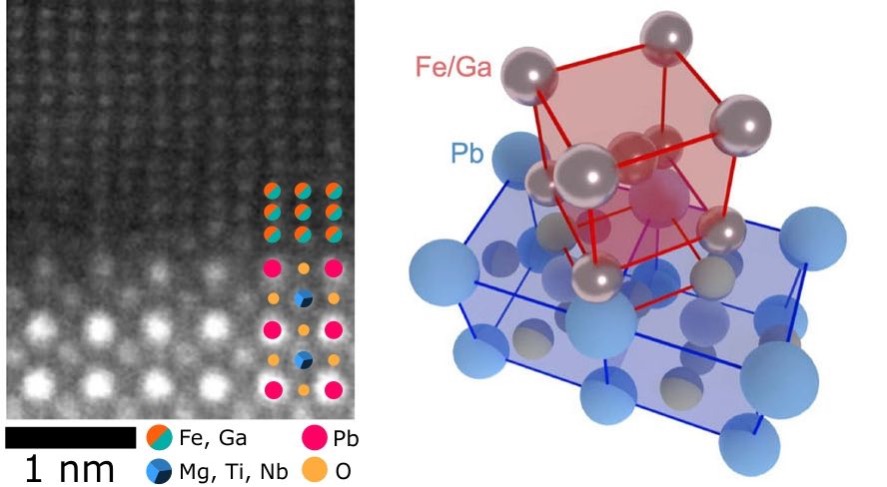 When a magnetostrictive material is combined with a piezoelectric material, the resulting composite enables electrical control of magnetism at room temperature. Such composites were first made by gluing a high-performance piezoelectric (e.g., PMN-PT) to a magnetostrictor. PARADIM user John Heron wanted to eliminate the glue in such a composite to achieve better coupling and higher performance. So he came to PARADIM to make an atomically abrupt epitaxial composite using PMN-PT as a single-crystal substrate onto which he deposited Galfenol. Not only did he achieve epitaxy, but the epitaxy enabled him to stabilize the high-performance A2 magnetostrictive phase of Galfenol to higher gallium concentrations than ever before achieved. Importantly, his measurements showed that the magnetostriction in this metastable A2 phase continued to increase—becoming 10x higher than bulk Galfenol and nearly twice as high as Terfenol-D, i.e., a new record magnetostrictor has been born! 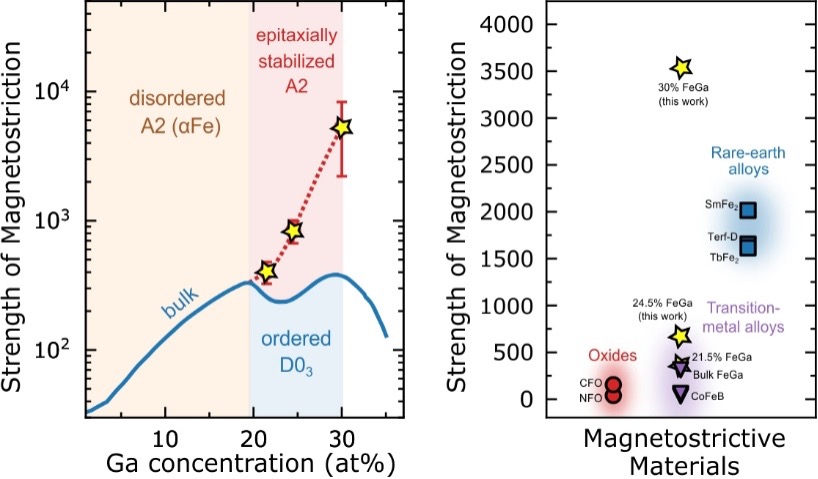 The composites utilizing this record magnetostrictor also have superb performance and calculations indicate that when optimally scaled they will provide non-volatile functionality with switching energies of ~80 aJ/bit. These epitaxial composites are thus relevant to beyond CMOS devices.

Magnetostrictive materials transduce magnetic and mechanical energies and when combined with piezoelectric elements, evoke magnetoelectric transduction for high-sensitivity magnetic field sensors and energy-efficient beyond-CMOS technologies. The dearth of ductile, rare-earth-free materials with high magnetostrictive coefficients motivates the discovery of superior materials. Fe1-xGax alloys are amongst the highest rare-earth-free magnetostrictive materials, however, magnetostriction becomes sharply suppressed beyond x = 19% due to the formation of a parasitic ordered intermetallic phase. Here, we harness epitaxy to extend the stability of the BCC Fe1-xGax alloy to gallium compositions as high as x = 30% and in so doing dramatically boost the magnetostriction by as much as 10x relative to the bulk and 2x larger than canonical rare-earth based magnetostrictors. A Fe1-xGax - [Pb(Mg1/3Nb2/3)O3]0.7 - [PbTiO3]0.3 (PMN-PT) composite magnetoelectric shows robust 90° electrical switching of magnetic anisotropy and a converse magnetoelectric coefficient of 2.0 × 10−5 s m-1. When optimally scaled, this high coefficient implies stable switching at ~80 aJ per bit.

Importance of the Achievement:A strong magnetostrictor that is rare-earth-free and can readily be incorporated in existing device technology has been demonstrated by PARADIM users from the University of Michigan in collaboration with researchers from 14 other institutions including members of PARADIM’s in-house research team and industry (Intel). In addition to having the highest magnetostrictive coefficient ever achieved at room temperature, the excellent performance of the resulting composite multiferroic makes it relevant for low-power non-volatile devices. An example of a device technology to which this new composite multiferroic is relevant is Intel’s patented magnetoelectric spin-orbit (MESO) device technology.

This work made use of PARADIM’s signature 62-element molecular-beam epitaxy system. To achieve epitaxial growth of FeGa at unparalleled low temperature (160 °C) on the piezoelectric PMN-PT substrates, PARADIM worked with a company that grows PIN-PMN-PT single crystals (TRS Ceramics) as well as a company that polishes PMN-PT substrates (CrysTec GmbH) to lower the damage associated with polishing and provide the PARADIM user with substrates for the growth of epitaxial Fe1-xGax films. Through multiple rounds of film growth and feedback to these two companies involved in making the substrates, the epitaxial growth was improved and with it the properties of the resulting epitaxial multiferroic composite.

The work has been featured in:

This work was funded in part by IMRA America. This work was performed in part at the Cornell NanoScale Science & Technology Facility and at the University of Michigan Lurie Nanofabrication Facility, members of the National Nanotechnology Coordinated Infrastructure (NNCI), which is supported by the National Science Foundation (NSF) through Grant NNCI-1542081. This work was partially supported by the NSF (Nanosystems Engineering Research Center for Translational Applications of Nanoscale Multiferroic Systems) under Grant Number EEC-1160504, made use of the Cornell Center for Materials Rresearch Shared Facilities supported through the NSF MRSEC program (DMR-1719875), and Michigan Center for Materials Characterization. Materials synthesis was performed in a facility supported by the NSF (Platform for the Accelerated Realization, Analysis, and Discovery of Interface Materials (PARADIM)) under Cooperative Agreement No. DMR-1539918. This work was supported in part by the Semiconductor Research Corporation (SRC) as the NEWLIMITS Center and NIST through award number 70NANB17H041. J.-M.H. acknowledges support from NSF grant CBET-2006028. This work used Bridges at the Pittsburgh Supercomputing Center through allocation TG-DMR180076, which is part of the Extreme Science and Engineering Discovery Environment (XSEDE) and supported by NSF grant ACI-1548562. R. H. recognizes support from (DMR-1807984).