Cleaning up a Quantum Material: from Quantum Enigma to Quantum Oscillations

Sr2RuO4 is the most disorder-sensitive superconductor known. It has also been a leading candidate for a novel type of quantum computer that would enable calculations to occur over much longer time scales before suffering decoherence than is the case for today’s superconductor-based quantum computers.  Establishing whether Sr2RuO4 is viable for such applications would be aided by the ability to make structures containing superconducting Sr2RuO4 films. 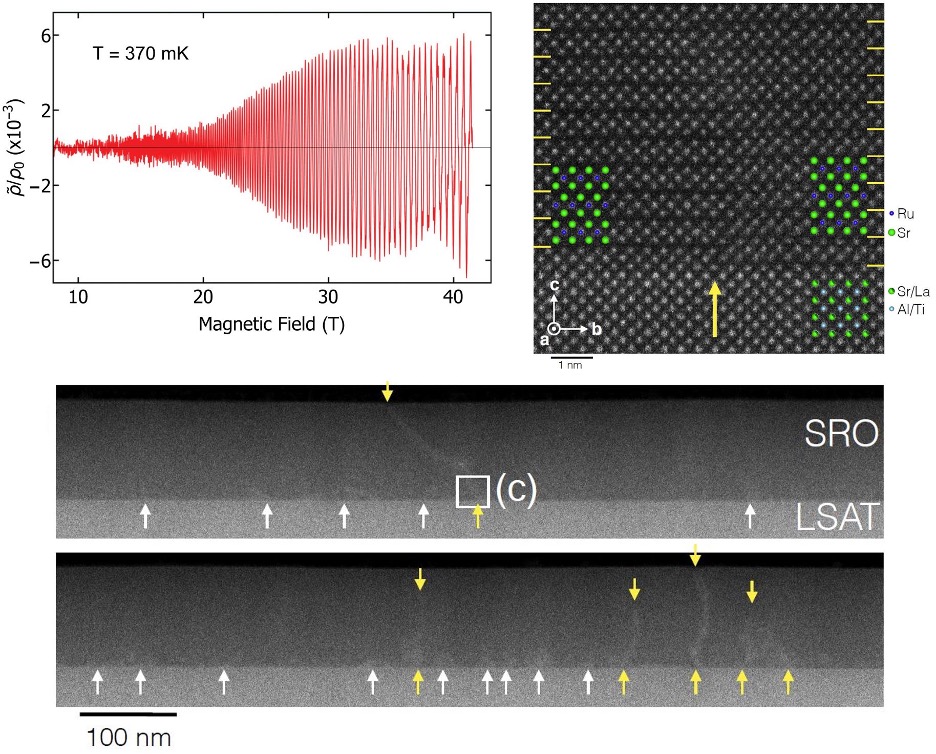 Figure 1: (top, left) Shubnikov–de Haas oscillations in Sr2RuO4. (bottom) Defect characterization by cross-sectional STEM. Many defects terminate near the interface of the film (white arrows), while some are observed to extend through more than half the film thickness (yellow arrows). (top, right) High-magnification of the area marked by the white box shows how Sr2RuO4 layers growing near a single unit cell step edge meet at a vertical defect due to the vertical offset of SrO planes on either side of the step edge.

To get an idea of whether the relatively high Tc observed in PARADIM’s Sr2RuO4 thin films can be attributed to film cleanliness or something else, quantum oscillation measurements were made. The electronic structure of Sr2RuO4 films and single crystals were found to be nearly identical, but important differences arise from the types of defects in the films (out-of-phase boundaries) versus in the single crystals (point defects).

We measure Shubnikov–de Haas oscillations in a thin film of Sr2RuO4 grown on an (LaAlO3)0.29-(SrAl1/2Ta1/2O3)0.71 substrate. We detect all three known Fermi surfaces and extract the Fermi surface volumes, cyclotron effective masses, and quantum lifetimes. We show that the electronic structure is nearly identical to that of single-crystal Sr2RuO4, and that the quasiparticle lifetime is consistent with the superconducting transition temperature, Tc, of comparably clean, single-crystal Sr2RuO4. Unlike single-crystal Sr2RuO4, where the quantum and transport lifetimes are roughly equal, we find that the transport lifetime is 1.3 ± 0.1 times longer than the quantum lifetime. This may suggest that extended (rather than point) defects could be the dominant source of quasiparticle scattering in these films. To test this hypothesis, we perform cross-sectional scanning transmission electron microscopy and find that out-of-phase boundaries extending the entire thickness of the film occur with a density that is consistent with the quantum mean free path. The long quasiparticle lifetimes make these films ideal for studying the unconventional superconducting state in Sr2RuO4 through the fabrication of devices—such as planar tunnel junctions and superconducting quantum interference devices.

Due to its sensitivity to disorder (Sr2RuO4 is the most disorder-sensitive superconductor known), it took more than 15 years between the growth of the first Sr2RuO4 thin film and the achievement of superconducting Sr2RuO4 thin films. By understanding the thermodynamics of growth of Sr2RuO4, PARADIM’s In-House research team was able to grow superconducting Sr2RuO4 films with nearly twice the Tc of prior superconducting Sr2RuO4 films, reaching a value higher than that of the very best Sr2RuO4 single crystals. This raised the question of why the Tc is so high. Do the films have less disorder than single crystals? Is there a strain enhancement of Tc in the films due to the slight lattice mismatch to the substrate they are grown upon? Is the defect microstructure different? This work answers these questions and shows that the disorder in the films is comparable to that of the best single crystals. The films do have differences in defect structure and this difference gives rise to the transport lifetime in the films being 30% longer than the quantum lifetime, whereas in single crystals the two lifetimes are comparable.

This achievement was facilitated by the highly collaborative atmosphere and knowledge sharing within the MIP. It required the combined expertise of thermodynamic modelling, MBE growth, electrical transport measurements, and superb electron microscopy. These span beyond the expertise of PARADIM’s In-House research team. But by teaming up with PARADIM users—users who know and trust each other because of their positive collaborative experiences within the MIP—this research team organically assembled, rose to the challenge, and succeeded in their research goal.