PARADIM – an Incubator for Collaborations II

Since the discovery of high-temperature superconductivity in copper-based oxides (cuprates), there has been a sustained effort to understand its origin and to discover new superconductors based on similar building principles. Indeed, superconductivity has recently been discovered in the doped rare-earth nickelate Nd0.8Sr0.2NiO2. Undoped NdNiO2 is the infinite-layer end member of a larger family of layered nickelates, which can be explored by molecular-beam epitaxy (MBE). 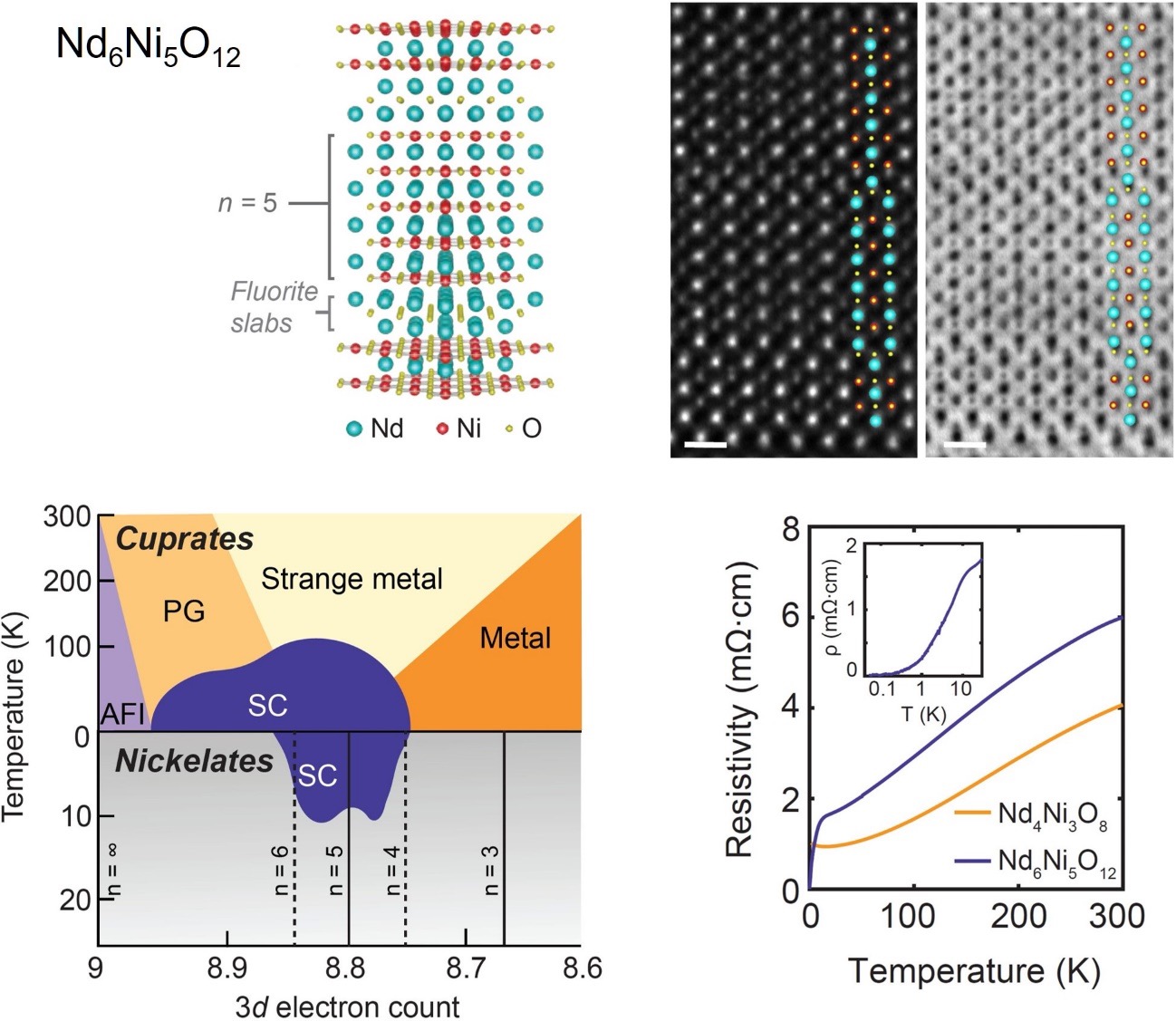 Figure 1: (top left) Crystal structure of the quintuple-layer nickelate in the Nd6Ni5O12 reduced square-planar phase. (top right) Structural characterization of the layered Nd6Ni5O12 nickelate in high-angle annular dark-field (left) and annular bright-field (right) STEM images, with structure overlaid. Nd, Ni and O are represented by turquoise, red and yellow dots, respectively. Scale bars, 5 Å. (bottom left) Schematic phase diagram for the electronic phases of the cuprates (top) and nickelates (bottom) including the superconducting dome (labeled SC) for cuprates and nickelates. AFI, antiferromagnetic insulator. (bottom right) Transport properties of the layered nickelate thin films. Resistive transitions of the layered square-planar Nd4Ni3O8 (n = 3) and Nd6Ni5O12 (n = 5) compounds into the insulating upturn and superconducting states, respectively. Inset is a close-up of the superconducting transition of the n = 5 compound from 50 mK to 30 K with temperature plotted on a log scale.

Here, experimentalists and theoreticians connecting at PARADIM engineered superconductivity through dimensional confinement in these layered systems without the need for chemical doping. Using PARADIM’s signature MBE, the team grew various stacked films each incorporating a precisely tuned number of layers as confirmed experimentally in PARADIM’s Electron Microscopy Facility. They demonstrated superconductivity for the 5-layer system with a critical temperature Tc = 13 K. The theoretical analysis reveals that the electronic structure of the 5-layer system can be understood as qualitatively intermediate between that of the cuprates and the infinite-layer nickelate. Engineering a distinct superconducting nickelate using a closed Materials-by-Design loop paves the way to explore nickelates as a new family of superconductors, which can be tuned by dimensionality and doping.

A collaborative team of PARADIM users have synthesized a quintuple-layer square-planar nickelate that demonstrates superconductivity with a Tc of 13 K. This square-planar trilayer and quintuple-layer compounds possess similarities to the doped infinite-layer nickelates but notably have positive Hall coefficients up to room temperature indicative of a more single-band-like picture. This, in tandem with the theoretical description achieved in this work, suggests that the quintuple-layer Nd6Ni5O12 possesses an electronic structure that is qualitatively intermediate between that of the cuprates and infinite-layer nickelates, and tunable by the dimensionality of the system. In revealing superconductivity in a new layered nickelate compound, the path to superconductivity is unlocked in the rare-earth nickelates as a family beyond the doped infinite-layer compound. While the nickelates are their own class of superconductors distinct from the cuprates, it is intriguing that the cuprate-motivated predictions of optimal d8.8 filling have yielded superconductivity, whether achieved through chemical doping or layering dimensionality. This work opens future avenues in which chemical doping and artificial layering may be harnessed in concert to map out and optimize superconductivity. In this vein, this PARADIM team suggests that exploring the phase diagram around optimal d8.8 filling by using Sr2+ or Ce4+ to chemically dope a layered nickelate may be an exciting route to further expand the family of nickelate superconductors.

Importance of Achievement: Since the discovery of high-temperature superconductivity in copper-based oxides, there have been sustained efforts to both understand the origins of this phase and discover new “cuprate-like” superconducting materials. One prime materials candidate has been the rare-earth nickelates and indeed superconductivity was recently discovered in the doped compound Nd0.8Sr0:2NiO2. Undoped NdNiO2 belongs to a series of layered square-planar nickelates with chemical formula Ndn+1NinO2n+2 and is known as the “infinite-layer” (n = 1) nickelate. Here, a team of PARADIM users report the synthesis of the quintuple-layer (n = 5) member of this series, Nd6Ni5O12, in which optimal cuprate-like electron filling (d8.8) is achieved without chemical doping. A superconducting transition beginning at 13 K is observed. Electronic structure calculations, in tandem with magnetoresistive and spectroscopic measurements, suggest that Nd6Ni5O12 interpolates between cuprate-like and infinite-layer nickelate-like behavior. In engineering a distinct superconducting nickelate, these PARADIM users identify the square-planar nickelates as a new family of superconductors which can be tuned via both doping and dimensionality.

This work made use of PARADIM’s signature 62-element molecular-beam epitaxy system including its ability to provide an oxidant with high activity (distilled ozone) needed to achieve the Ni3+ in the as-grown films. PARADIM’s differentially pumped sources proved critical for this purpose as the extra pumping provided at the MBE sources allows 10 times higher pressures of distilled ozone to be employed at the substate during growth than standard MBE sources can withstand. These challenging materials were made by a team of 5 external users who grew round-the-clock—the PI, a research associate, a postdoc, a graduate student, and an undergraduate—plus PARADIM Scientist Dr. Hanjong Paik. This team made use of a new and rather general method to more accurately calibrate the fluxes of molecular beams developed by another group of PARADIM users and broadly shared within the Platform prior to publication. Accurate composition control is key to the growth of oxide thin films by MBE. The present team from Harvard and Arizona State used that method as a first step but finding it insufficiently accurate for the challenging synthesis of these particular nickelates went further by developing a more extensive flux calibration scheme. This enhanced calibration scheme has in turn been shared (prior to publication) with yet other users of the Platform growing nickelates. This is thus another example of knowledge sharing of unpublished results for the common good among members of the Platform. This work also made use of PARADIM’s new Thermo Fisher Spectra 300 X-CFEG electron microscope. It is the first publication to result from work in this microscope and as is evident, the imaging and STEM-EELS are spectacular.

We thank M. R. Norman and M. Mitrano for discussions. We also thank K. Lee and H. Y. Hwang for discussions and technical guidance in reduction experiments; D. Erdosy, J. Lee, N. Pappas, S. Thapa and M. Wenny for continued support in reductions; H. Hijazi at the Rutgers University Laboratory of Surface Modification for assistance in Rutherford backscattering spectrometry; and J. MacArthur for electronics support. This research was funded in part by the Gordon and Betty Moore Foundation’s EPiQS Initiative, grant no. GBMF6760 to J. A. Mundy. Materials growth and electron microscopy were supported in part by the Platform for the Accelerated Realization, Analysis, and Discovery of Interface Materials (PARADIM) under NSF Cooperative Agreement no. DMR-2039380. Electron microscopy made use of the Cornell Center for Materials Research (CCMR) Shared Facilities, which are supported through the NSF MRSEC Program (no. DMR-1719875). The Thermo Fisher Spectra 300 X-CFEG was acquired with support from PARADIM, an NSF MIP (DMR-2039380) and Cornell University. Nanofabrication work was performed in part at Harvard University’s Center for Nanoscale Systems (CNS), a member of the National Nanotechnology Coordinated Infrastructure Network (NNCI), supported by the National Science Foundation under NSF grant no. 1541959, and in part at the University of Michigan Lurie Nanofabrication Facility. This research used resources of the Advanced Light Source, a US DOE Office of Science User Facility under contract no. DE-AC02-05CH11231. G.A.P. acknowledges support from the Paul & Daisy Soros Fellowship for New Americans and from the NSF Graduate Research Fellowship grant no. DGE-1745303. G.A.P. and D.F.S. acknowledge support from US Department of Energy, Office of Basic Energy Sciences, Division of Materials Sciences and Engineering, under award no. DE-SC0021925. Q.S., S.D. and D.C.C. were supported by the STC Center for Integrated Quantum Materials, NSF grant no. DMR-1231319. B.H.G., H.P. and L.F.K. acknowledge support by PARADIM, NSF no. DMR-2039380. A.T.P. acknowledges support from the Department of Defense through the National Defense Science and Engineering Graduate Fellowship (NDSEG) Program. J. A. Mason acknowledges support from the Arnold and Mabel Beckman Foundation through a Beckman Young Investigator grant. O.E. acknowledges support from NSF grant no. DMR-1904716. A.S.B. and H.L. acknowledge NSF grant no. DMR-2045826 and the ASU Research Computing Center for HPC resources. J. A. Mundy acknowledges support from the Packard Foundation.