Quantum View of a Superconductor-Semiconductor Junction

Currently, electronic device technology is based mainly on semiconductors.  It first emerged in the middle of the 20th century and has improved ever since. Further technological advances including energy efficiency and information security might profit from exploiting quantum mechanical properties that are present in superconductors. The challenge is how to combine the two states and to make sure to get the best of both electrical worlds. A collaboration of researchers from Cornell and the Paul Scherrer Institute (PSI) in Switzerland grew thin films of the superconductor niobium nitride (NbN) on top of gallium nitride (GaN), a semiconductor and vital component in many optical and power electronics. The team measured the electronic properties of the two materials directly at their interface using soft-X-ray angle-resolved photoelectron spectroscopy (ARPES). 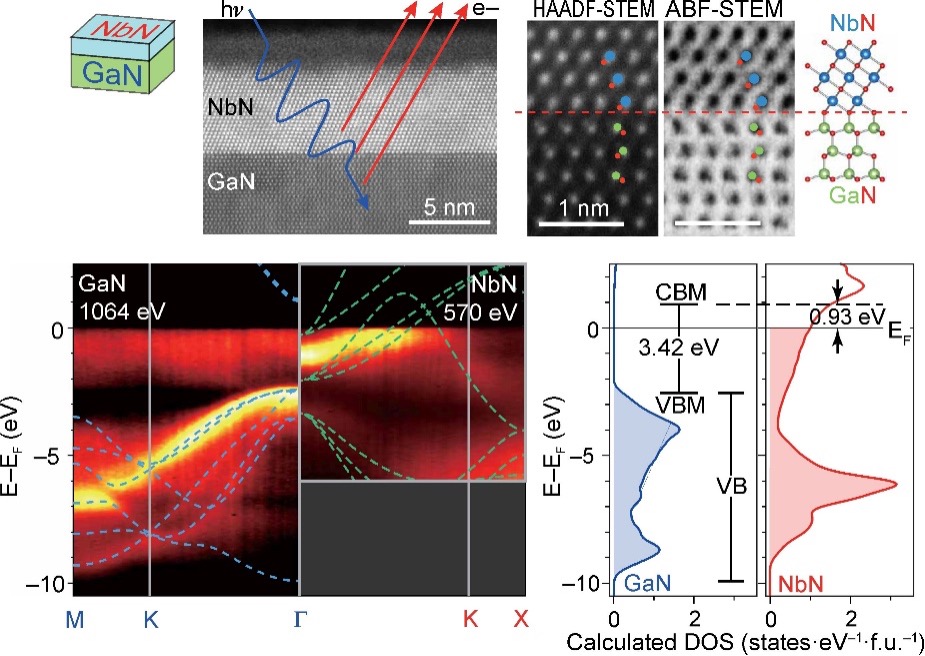 PARADIM's electron microscopy and theory user facilities provided structural characterization and first-principles calculations of the two materials and the superconductor-semiconductor interface. The electronic states of NbN and GaN at the Fermi level remain separated, therefore revealing that the superconducting property of NbN is unchanged when interfaced with GaN. The new momentum-resolved understanding of the electronic properties right at the interfaces opens up new frontiers for quantum materials where subtle effects at the interfacial states play a defining role.

Electronic structure at a heterointerface is the key to controlling the functionality of a device. Using soft x-ray angle-resolved photoelectron spectroscopy (SX-ARPES), the electronic structure of both sides of the Schottky heterointerface formed by epitaxial films of superconducting NbN on semiconducting GaN is measured in agreement with the electronic structure calculations from first principles conducted at PARADIM’s theory facility. We find that the electronic states at the Fermi level in NbN are separated in energy and momentum from the states in GaN, therefore revealing that the superconducting properties of NbN is unchanged when interfaced with GaN. The Schottky barrier height obtained from photoemission is corroborated by electronic transport and optical measurements. The momentum-resolved understanding of electronic properties of interfaces elucidated in our work opens up new frontiers for the quantum materials where interfacial states play a defining role.

The staff scientist of the theory user facility at PARADIM is a co-PI of the proposal about understanding and modifying the superconducting properties of transition-metal nitrides. All first-principles calculations are performed at PARADIM computational resources.

In the News:
Full reference:

Data associated with this project are available through the PARADIM Data Collective at DOI: https://doi.org/10.34863/b8x7-5y76/