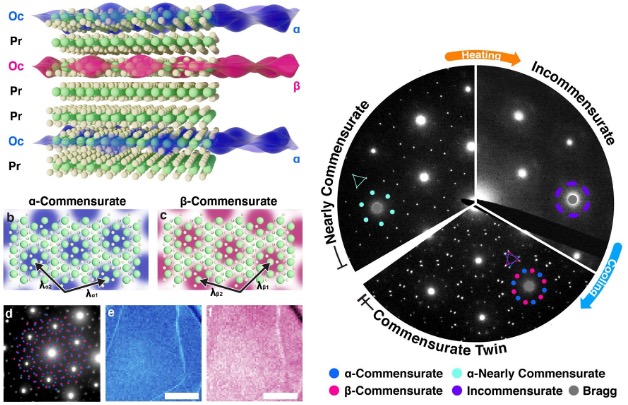 To close the loop of their materials discovery the users developed a model to illustrate the pathway for accessing these coherent 2D quantum states through heat treatment of the host crystal, initializing the system to an incommensurate phase that choses either of the commensurate structures when cooled down.

In summary, the long-range ordered CDW state was stabilized at room-temperature by reducing its dimension to 2D using engineered interdigitated polytypes of TaS2. The metallic layers isolate each 2D CDW to restore twin degeneracy giving rise to an out-of-plane twinned commensurate CDW phase. 4D-STEM mapped twinned CDW order across large fields-of-view (~1 μm) to confirm twin structure and atomic resolution HAADF-STEM revealed the 2D Oc-layers embedded in metallic Pr-layers. Both structural and electronic investigations show that the disordered NC-CDW phase disappears for a 2D CDW in a chemically and epitaxially native environment. The stabilization of the tC-CDW phase illustrates 2D polytype engineering as a new route to exotic correlated electron states.

The project was enabled through a PARADIM User Proposal submitted by Robert Hovden (University of Michigan) and the user’s group performed the electron microscopy at PARADIM facilities.

S.H.S. acknowledges the financial support of the W.M. Keck Foundation. L.Z. acknowledges support by NSF CAREER grant No. DMR-174774 and AFOSR YIP grant No. FA9550-21-1-0065. Experiments were conducted using the Michigan Center for Materials Characterization (MC2) with assistance from Haiping Sun and Bobby Kerns and the Platform for the Accelerated Realization, Analysis, and Discovery of Interface Materials (PARADIM) supported by the National Science Foundation under Cooperative Agreement No. DMR-2039380. This work was performed in part at the University of Michigan Lurie Nanofabrication Facility with assistance from Pilar Herrera-Fierro, Vishva Ray, and Sandrine Martin—supported by the National Science Foundation Major Research Instrumentation award under No. DMR-1428226. Y.L., W.J.L., and Y.P.S. thank the support of the National Key Research and Development Program under contracts 2016YFA0300404 and the National Nature Science Foundation of China under contracts 11674326, 11774351. T.H.B. acknowledges support from the Office of Naval Research through the Base Program at the Naval Research Laboratory. P.B.D. acknowledges support of the Army Research Office grant No. W911NF2010196. We thank Lu Li for helpful discussion.