The Dawn of a New Generation of High-Brightness Electron Sources

The ultimate performance of some of the most powerful characterization tools including x-ray free electron lasers, ultrafast electron microscopes, and particle accelerators are determined by the ability of their electron sources to emit electrons. This small, yet vital element of these multimillion to multibillion dollar systems, has the potential to be improved greatly; the performance of commonly used electron sources pales in comparison to the theoretical limit due to roughness, disorder, and polycrystallinity. The path to maximally efficient electron sources is thus believed to lie with single-crystal films, where the smoothness, homogeneity, and termination can be controlled at the atomic level. Unfortunately, the most desired materials for electron sources contain highly reactive species like cesium, which has stymied the preparation of single-crystal films of these desired electron sources—until now. 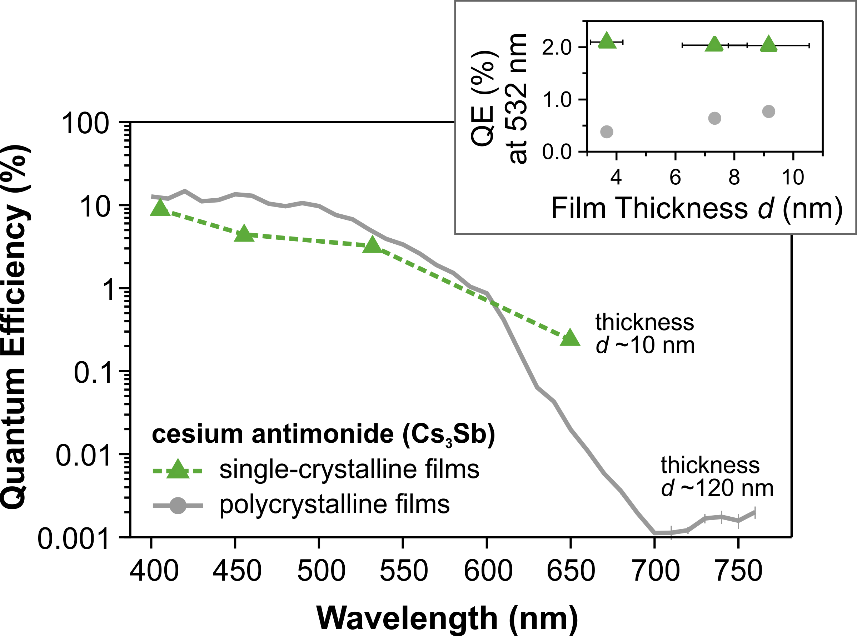 Figure 1: Quantum efficiency (QE), as a function of wavelength and film thickness. QE of polycrystalline Cs3Sb, grown on Si (100) are included for comparison. The inset shows the QE, at 532 nm of 3 samples of varying thickness grown under the same nominal conditions.

Scientists from NSF’s Center for Bright Beams, an NSF-STC, made use of PARADIM’s molecular-beam epitaxy system and expertise in safely handling alkali metals in vacuum to explore the growth of cesium antimonide (Cs3Sb) thin films in single-crystal form. The precisely controlled fluxes in combination with important feedback from advanced in-situ characterization tools contributed to the success of this work.

The team, with support from PARADIM researchers, achieved films that display unusually high efficiency at thicknesses as low as 4 nm. These single-crystal films open the door to dramatic brightness enhancements for electron sources via increased efficiency, reduced surface disorder, and the possibility of engineering new photoemission functionality at the level of single atomic layers.

Dense and coherent electron beams generated via photoemission enable many revolutionary tools in the physical sciences. These include x-ray free electron lasers with 109 times higher peak x-ray brightness than previous sources, ultrafast electron microscopes that achieve femtosecond temporal and atomic structural resolution, hadron collider luminosity-enhancing systems based on electron beams, and next-generation electron linear colliders, which will probe physics beyond the standard model. The properties of photoemission electron sources determine the ultimate performance of a wide class of electron accelerators and photon detectors. To date, all high-efficiency visible-light photocathode materials are either polycrystalline or exhibit intrinsic surface disorder, both of which limit emitted electron beam brightness.

Here, users of PARADIM demonstrate the synthesis of epitaxial thin films of Cs3Sb on 3C-SiC (001) using molecular-beam epitaxy. Films as thin as 4 nm have quantum efficiencies exceeding 2% at 532 nm. They also find that epitaxial films have an order of magnitude higher quantum efficiency at 650 nm than comparable polycrystalline films on silicon. Additionally, these films permit angle-resolved photoemission spectroscopy measurements of the electronic structure, which are found to be in good agreement with theory.

Epitaxial films open the door to dramatic brightness enhancements via increased efficiency near threshold, reduced surface disorder, and the possibility of engineering new photoemission functionality at the level of single atomic layers.

This project made use of PARADIM’s molecular beam epitaxy (MBE) system that allows users to freely select among 62 elements of the periodic table, including alkali metals, needed here. Growing films containing alkali metals by MBE is uncommon due to their extreme flammability. PARADIM has developed a means to contain them safely by reacting them in a glovebox into air-stable intermetallics that can be subsequently exposed to air, loaded into the PARADIM MBE, and heated to provide a clean beam of the desired alkali metal because the other constituent of the intermetallic has a vapor pressure that is many orders of magnitude lower. PARADIM’s ability to handle alkali metals greatly expands the palette of elements available to users and thus enhances their material discovery capabilities.

The project was conceived by researchers from NSF’s Center for Bright Beams, an NSF-STC, and access to PARADIM resources was granted based on a Full Access User Proposal.

In the News:
Full reference:

This work was supported by the U.S. National Science Foundation Grant PHY-1549132, the Center for Bright Beams, and by the National Science Foundation (Platform for the Accelerated Realization, Analysis, and Discovery of Interface Materials (PARADIM)) under Cooperative Agreement No. DMR-2039380. This work made use of the Cornell Center for Materials Research Shared Facilities which are supported through the NSF MRSEC program (DMR-1719875).

Additional data related to the growth and structural characterization are available at https://doi.org/10.34863/6d5f-aj24 provided through the PARADIM Data Collective.