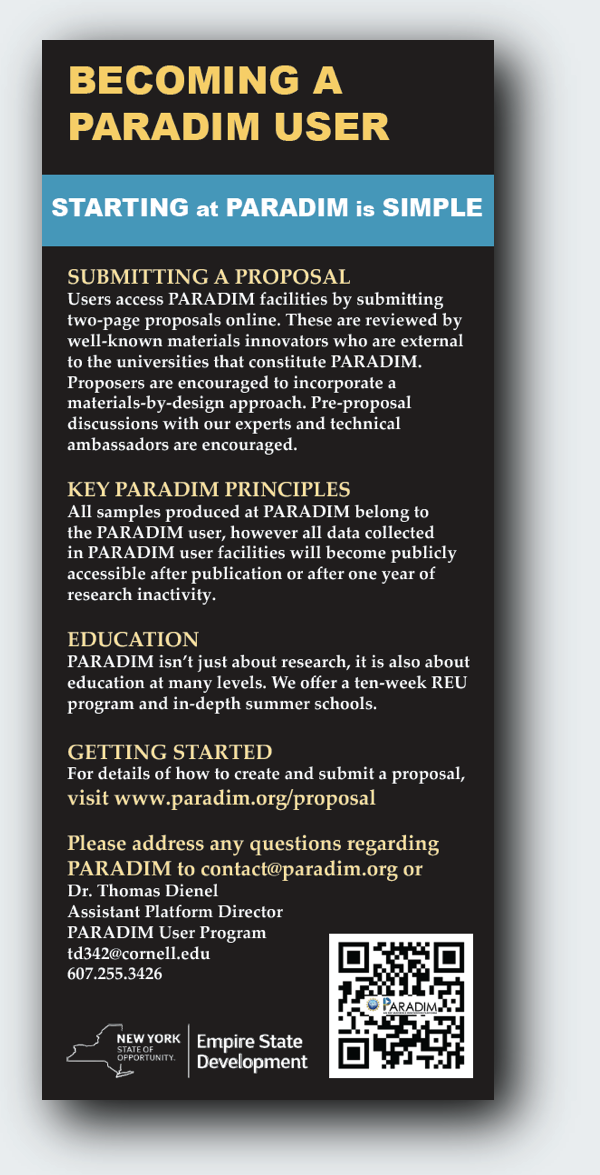 The proposal packet consists of:

The Lab Access proposal should be written in light of the PARADIM proposal review criteria. Namely, it should specifically address:

The proposal packet consists of:

The Sample Only proposal should be written in light of the PARADIM proposal review criteria.

Successful proposals will take significant advantage of PARADIM by implementing a closed loop Materials-by-Design process involving theory, growth, and characterization to develop electronic materials. The manner in which this will be accomplished should be clearly discussed.

If preliminary discussions have been conducted with PARADIM scientists regarding technical feasibility (highly recommended), please reference these discussions.

Proposals should request access to specific PARADIM resources. PIs MAY request specific amounts of time (e.g., 1 month on furnace A and 2 weeks on TEM B), but these requests may be modified by the Director of User Facilities, based on the proposal reviews and input from the PARADIM scientists.

The proposal should be limited to 2-3 pages, plus references. It should begin with the project title. It should conform to standard NSF font/margin requirements. (1” margins, 11-point Times New Roman).

PARADIM has implemented the following User Proposal process. The exact process is expected to evolve as PARADIM gains additional experience.

User proposals to PARADIM are received via email or the online Proposal Submission Portal. They are immediately entered into a custom on-line tracking database. PARADIM maintains a pool of 32 distinguished reviewers in the areas of thin film growth, bulk crystal growth, microscopy, and theory. If the proposal has not been vetted with PARADIM facility staff for feasibility, the proposal is first sent to facility directors/staff for a safety and feasibility review.

Proposals which are deemed feasible are then sent out for review. Each proposal is sent to three reviewers along with instructions and a review form. All reviews are tracked in the same integrated proposal/review database. PARADIM’s goal is that all proposals be reviewed within 8 weeks. Each reviewer ranks proposals on a scale of 1 (poor) to 5 (superior). PARADIM’s current threshold for proposal acceptance is an average score of 3.0. This threshold is expected to increase as PARADIM’s user base grows.

**To assure confidentiality, industrial proposals will also be reviewed internally.

Lab access proposals will be reviewed by at least 3 members of the PARADIM User Proposal Review Committee – well known materials innovators who are all external to the universities that constitute PARADIM. These external reviewers will score each proposal considering the following criteria:

Proposers will be notified of the outcome of the review process within 4 - 8 weeks.

Sample Only proposals will be reviewed internally.

Highly ranked proposals will be allocated time on specific PARADIM resources by the Director of User Facilities. Ranking may include additional criteria including preference for new PARADIM users, demographics, and users from non-R1 universities§.

Successful proposals will not be renewed or extended nor will the resource allocation be expanded when expended. A single successful technical proposal will cover a period of up to one year or until the resource commitment is exhausted. At the end of that period, a new proposal may be submitted building upon the results of the prior project; it will be reviewed with consideration of the accomplishments in the prior period.

The content of proposals (including proposal titles and the identity of the PI) will be held confidential within the PARADIM community (Technical Staff and User Proposal Review Committee). For purposes of safety, feasibility , resource allocation, proposals may also be shared with affiliated user facility faculty. Proposers may, however, opt out of this sharing and limit distribution within PARADIM. Title and PI identity may, however, be disclosed to the National Science Foundation as part of the normal reporting process. For approved proposals, PI and user names may appear on equipment schedules/usage logs on site, but such information will not be otherwise disseminated.

PARADIM resources are free of charge to U.S. Academic Users. In addition, travel support will be available to users from non-R1 universities. Industry will be charged for access based on cost recovery and their results will not be made publicly available. Non-US institutions will be charged for access at an intermediate rate and their results will be made publicly available as described below.

Proposers are reminded of some of the policies that will govern their use of PARADIM: