Typical magnets are bulk materials containing stacks of layers. Theorists have suggested that shrinking the thickness to a 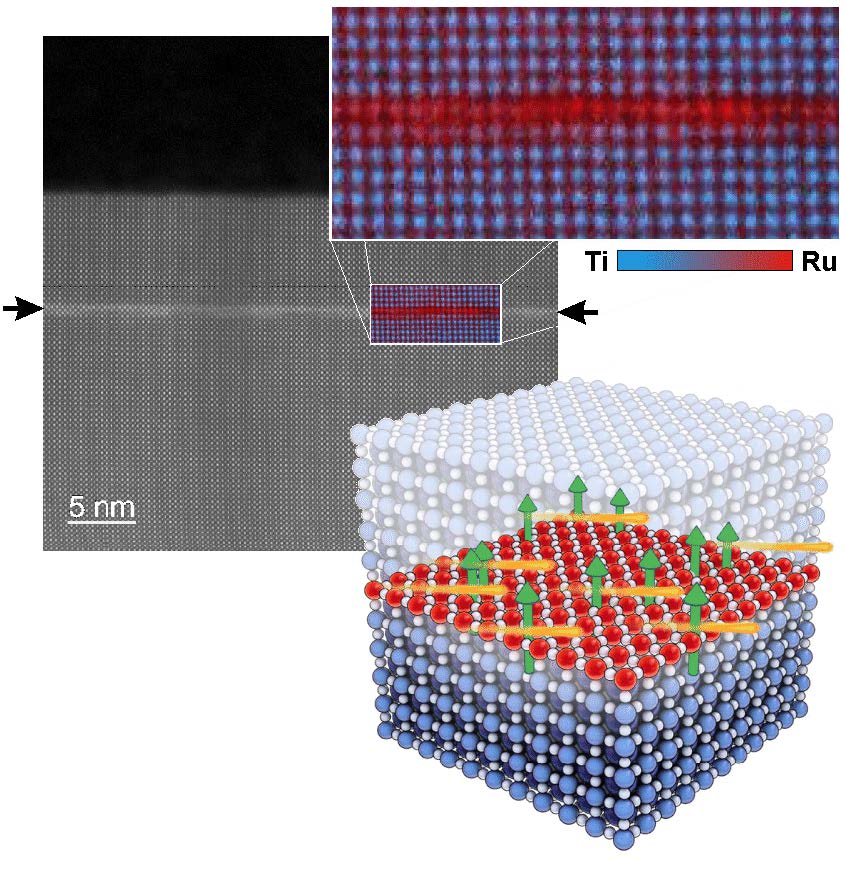 single monolayer might destroy this behavior, but recent experiments show that ferromagnetism survives in monolayer-thin flakes of CrI3 and Cr2Ge2Te6. Small-scale ferromagnetism can be vital to low- power electronic circuitry known as spintronics. To be able to make such circuitry smaller, it is important to understand the fundamental limits to ferromagnetism and to develop methods that can coat large-area integrated circuits.

PARADIM scientists collaborating with groups from around the world show that ferromagnetism can exist in a single monolayer of RuO2 captured in the right packing between insulating surrounding layers.

The advantage of this new monolayer-thin ferromagnet over flakes of CrI3 or Cr2Ge2Te6 is that the oxide film can be deposited over large areas evenly, making it relevant to technology.

Recently published examples of CrI3 and Cr2Ge2Te6 are small flakes that were mechanically exfoliated from bulk crystals and demonstrate ferromagnetism for truly two-dimensional materials. Technological viability on the other hand requires the growth and uniform coating of arbitrarily large areas.

Transition metal oxide heterostructures circumvent the issues of stability and can be directly grown on insulating substrates, thus realizing isolated electron systems that can be electrically contacted and controlled. SrRuO3 is one of the oxide materials with the highest conductivity and it is chemically inert. Therefore, it is widely used in applications such as electrodes of capacitors. In addition, it is an itinerant ferromagnet with a saturation moment of 1.6 μB/Ru and a Curie temperature TC of 160 K. The low intrinsic disorder and the well-understood growth make SrRuO3 an ideal candidate for the realization of a two-dimensional spin-polarized electron system.

PARADIM researchers in collaboration with groups from Germany, the Netherlands, the University of Michigan, and MIT prepared and investigated (SrRuO3)1 / (SrTiO3)5 superlattices and single-unit-cell-thick SrRuO3 samples surrounded on both sides by SrTiO3. These samples contain a single monolayer of RuO2 embedded in SrTiO3 (Figure), i.e., the electron system is comprised of only a single RuO2 plane. Conductivity is observed down to 50 mK. The ferromagnetic state shows a Curie temperature TC of 25 K, and signals of magnetism persist up to approximately 100 K.

These structures are a rare example of two-dimensional ferromagnetism and the first demonstration of two-dimensional ferromagnetism due to indirect exchange. They may therefore serve as a model system for further theoretical studies.  For example, doping this electronic system with additional carriers is expected to change its magnetic properties and possibly enable a novel topological superconducting state analogous to that found in Sr2RuO4.

This highlight provides an example of the precise interface quantum materials that can be created by MBE and characterized by high-resolution STEM and elemental analysis in PARADIM facilities.